Dengue has turn out to be one of the deadliest infections over the last decade. It has effected over 100 countries in Africa, America, the Eastern Mediterranean, South-East Asia and the Western Pacific. Asia shares almost 70% of the global burden of the disease.

Every year, about 390 million dengue infections are observed globally. Of these, about 500,000 land into severe form of disease and around 5% die of this. 1 About 15,719 cases of dengue fever has been recorded from Pakistan this year to date,(13th oct 2021) where as 34 people died due to this infection until now. 2

Expanded dengue syndrome is an entity in which patients develops an unusual manifestation involving different organ especially brain with or without plasma leak 3 Dengue was classically thought to be a non-neurotropic virus but by evidence from ongoing research, serotype 2 and 3 are found to be involved in neurotropism 4 . Virus effects the brain tissue either by direct invasion or it can cause post infectious immune mediated neuronal destruction. Furthermore, systemic metabolic disturbances can also contribute to encephalopathy. It is necessary to differentiate between dengue encephalitis and ADEM as encephalitis is usually common and managed conservatively and seen during dengue infection. Temporal relation with disease is one of the most important point differentiating encephalitis from ADEM. However ADEM can also present during active disease, classical radiological findings of ADEM have made it possible to differentiate between two entities during disease period.

Acute disseminated encephalomyelitis (ADEM) occurs in 0.4 -0.8/100,000/year. It can occur in acute or post-infectious phase of dengue infection. Average time is 3-19 days. Transient autoimmune response towards myelin by the mechanism of molecular mimicry leads to demyelination of the white matter of the brain, spinal cord or both. It is classically a multifocal, and monophasic disease presenting with altered mental state, seizures and focal neurological deficits 5 . MRI brain is the main stay of diagnosis may be supported by CSF analysis. Demyelinating lesions involving cerebral white matter and deep gray nuclei with or without foci of hemorrhagic foci on are pathognomonic of ADEM following dengue infection. The spectrum of radiological features observed in ADEM ranges from multifocal lesions in brain white matter that may or may not involve basal ganglia, single or multiple lesions only in brain grey matter or focal lesions in the brain stem, basal ganglia, and/or cerebellum 4, 5, 6

Few studies and case reports of dengue associated ADEM are available in literature 5, 6, 7, 8 , majority described mix picture of encephalitis or non extensive brain involvement. More over, almost all were accompanied by hematological parameters disturbances or capillary leakage. Here we describe our experience of dengue related ADEM in the form of Case series.

A 22-year-old previously healthy male was brought to the accident and emergency department with a history of rapid deterioration of conscious level for the last 2days. There was preceding history of dengue fever 8 days. No decline in total leukocyte count (TLC) and platelets were observed during his dengue illness.

A 50-year-old female at the emergency department with a history of recent dengue fever 10days back, presented with right sided weakness and decreased level of consciousness for the last 2 days. On examination, positive findings included BP 160/100 mm of Hg, Heart rate 54/min and GCS OF E1 V2 M3 6/15. Her pupils were sluggishly reactive to light reactive and she had bilateral extensor plantar reflex. She was intubated there and was placed on ventilator support. Serological and hematological evaluations revealed dengue IgM and IgG positive with normal hematocrit, TLC and Platelets. MRI brain revealed abnormal signals in left basal ganglia and adjacent deep insular and frontotemporal lobes. These appear hyperintense on T2WI and FLAIR, have diffusion restriction and show ring like and patchy extensive enhancement. Few have associated rim of edema. There is mass effect on left lateral ventricle with 4.8mm midline shift. similar signal intensity marginally enhancing focus in right medial temporal lobe in its posterior gyrus. Few smaller similar signal foci seen in left side of brainstem and in right basal ganglia. Few non-enhancing microvascular ischemic foci noted in background frontoparietal white matter. Lumber puncture couldn’t be carried out because of significant midline shift. She was started on Solumedrol 1gm/day along with supportive care. Neurosurgical decompression was offerred but keeping in view the high risk benefit ratio, attendants refused it. She deteriorated on 2nd day of admission and passed away.

2 weeks post dengue 27 years old male patient presented with 2 days history of aphasia, urinary incontinence altered sensorium and drowsiness. He was vitally stable. Examination was unremarkable except Glasgow coma scale (GCS) of E4V3M6 (13/15). Contrast-enhanced MRI brain revealed extensive T2/FLAIR white matter hyperintensities in bilateral frontal and left parieto occipital lobes. There is no significant cortical or basal ganglia involvement. No mass effect seen. These areas shows faint patchy enhancement with no restriction. Her lumber puncture showed lymphocytic pleocytosis with raised protein. CSF PCR for HSV I and II was negative. Patient was started on pulse steroid therapy. He started deteriorating, on 4th admission day her GCS dropped to 7/15. Plasma exchange was offered keeping in view the unresponsiveness to steroids and aggressive course of disease. He had 5 session of Plasma exchange, his GCS remained static for few days but then at 10th day of admission his GCS started declining, repeat MRI brain showed interval worsening of lesions. He was put on ventilator support due to low GCS, he remained on ventilator with GCS of 5/10 E2M3. While on ventilator he acquired ventilator associated Infection that was treated with antibiotic as per culture and sensitivity report, recovered from it. On 16th day of admission his tracheostomy was done keeping in view his persistently low GCS. Over the period of few days, he was intermittently put on spontaneous ventilator mode and wean off trail was given but he couldn’t be weaned off. On 22nd day of admission he developed bradycardia and hypertension. His urine output increased to 500ml/hr. Fluid and electrolyte balance was maintained as per increased output. His GCS dropped to 3/15. The next day, his pupils were dilated and nonresponsive to light, however Gag and cough reflex was present. The patient lost his brain stem reflexes with in few hours. He was taken out from life support on 23rd day of admission and declared dead. 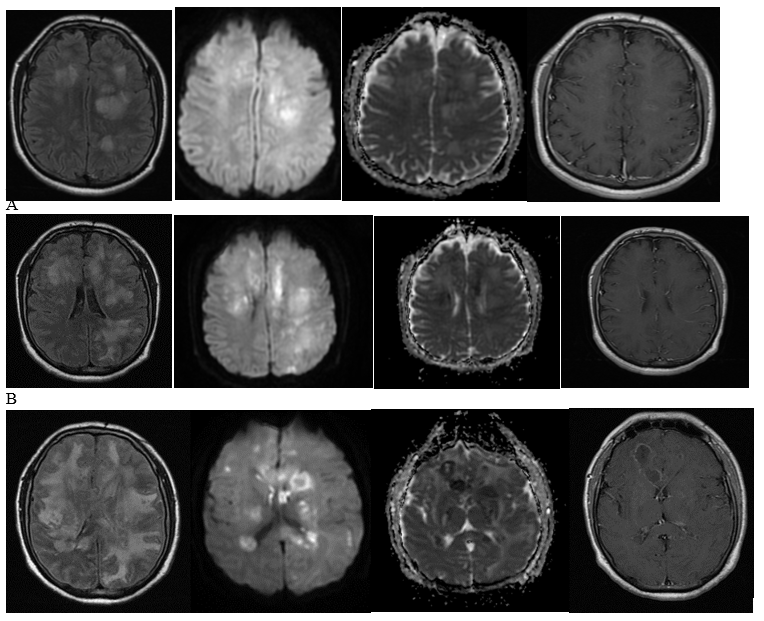 B at 3rd day of admission

C at 13th day of admission

4 days post dengue fever 52 years old diabetic male father of patient 4 was taken to neurology OPD with 1 day history altered mental status and confusion. He was vitally stable having temp of 101F. Examination was unremarkable apart from slight confusion and Glasgow coma scale (GCS) of E4V4M6 (14/15). Serological and hematological evaluations revealed dengue IgM positive with normal hematocrit, white blood cells and platelets. MRI brain revealed abnormal FLAIR/T2 signals in bilateral parietal and left frontal and temporal lobes involving subcortical and deep white matter. No contrast enhancement or restricted diffusion seen. No mass effect or midline shift seen. He was started on pulse steroid therapy but he had an episode of generalize tonic clonic fits and his conscious level deteriorated next 2 day. He was offered plasma exchange and shifted to ICU for ventilator support due to low GCS. While on ventilator, his condition continue to become worse. He remained on ventilator support, received 4 sessions of plasma exchange but landed up in brain herniation leading to brain stem death. His ventilator support was withdrawn and declared dead on 7th day of admission.

57 years old hypertensive female was shifted from other hospital with history of worsening level of conscious level over the past 4days. She had history of fever 20days back that lasted for 3days and settled at its on. She was vitally stable. Her GCS was 6/15 and bilateral planter response was equivocal. Pupils were mid position non-reactive to light. MRI brain done in other hospital reported multiple hyperintense signals on T2 and FLAIR images in bilateral frontoparietal lobes more on the right side. Few T2/FLAIR hyperintense lesions were also seen in cerebellum and pons. They showed diffusion restriction on DWI/ADC and partially enhanced on contrast image. There was no midline shift. She was intubated because of low GCS. She had been receiving pulse steroids for the past 3 days that continued in our hospital as well. Next day she developed bradycardia, her pupils were dilated, nonreactive to light. After few hours she had cardiac arrest and expired. 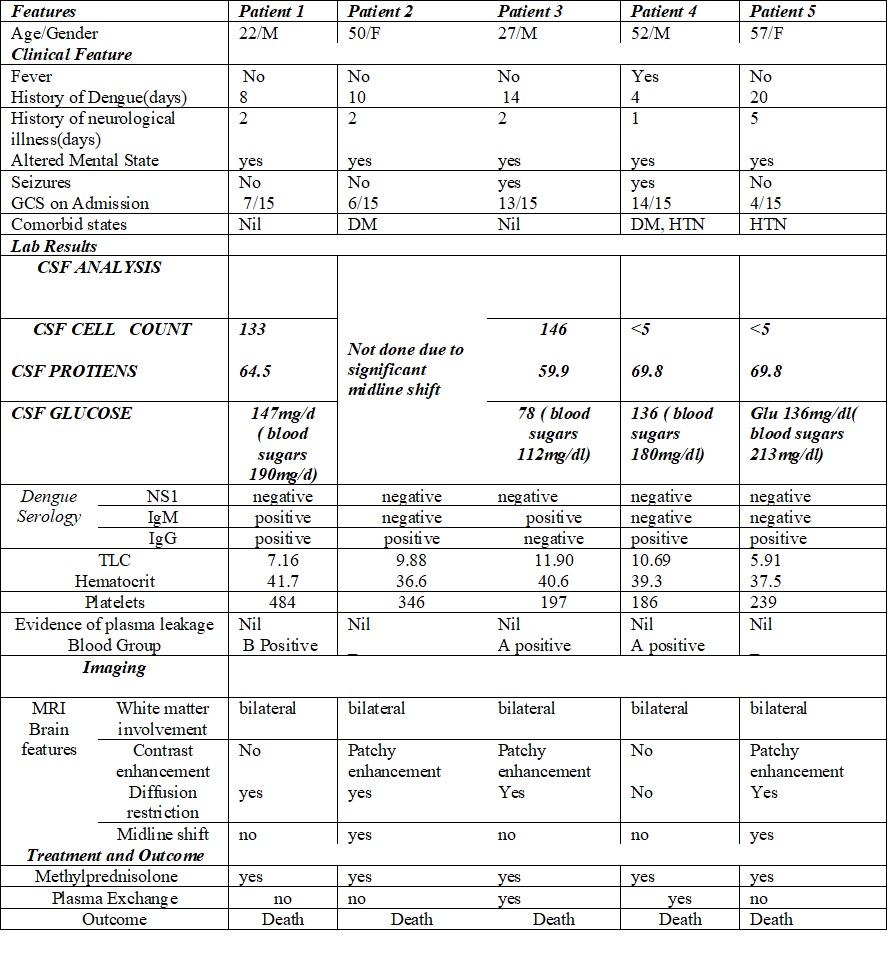 Dengue fever with atypical neurological complications carry a real challenge for clinician not only in terms of diagnosis but also management. Temporal relationship of fever onset and appearance of lesions on MRI is one of the clue towards diagnosis of ADEM vs encephalitis. The onset of post-dengue ADEM has been described from 3 to 19 days of dengue infection in one meta-analysis 9 .

In a meta-analysis, fever and onset of neurological symptoms <9.5days were found to be the predictors of poor outcome in ADEM. Fever wasn’t present in our cases except for one patient, as he was the only one who had acute dengue infection. In our case series, Mean interval between dengue infection to neurological symptoms was 11.2days. Even with Absence of fever and longer latent period, all our patient had poor outcome. These differences can be explained on the basis of virus related rapid ongoing genetic mutation and may be disease severity in Asian population.

More than 80% patients in ADEM recover fully, but statistics are lacking about dengue related ADEM. In our experience, it takes the aggressive course even with early recognition and initiation of treatment with pulse steroids didn’t help. Keeping in view the fast disease progression plasma exchange were offered to 2 patients but we faced poor outcome. The one who is alive with low GCS, his brain lesions were kept on getting massive despite all our efforts. This type of aggressive disease course and extensive brain lesions have been described in only couple of case reports that also ended in death of patient. 7, 8 In literature, many cases responded well to steroids, it might be due to lesser degree of brain involvement at the time of treatment initiation. 10, 11

None of our patients had dengue related hematological abnormality or evidence of capillary leakage neither in their dengue infection period nor later when they presented with ADEM. These findings are also unique to our cases as previous case reports have mentioned at least one of the abnormalities in this regard. 7, 8, 10, 11 Aggressive form of ADEM as a squeal of simple uncomplicated dengue infection is one of the factors observed 1st time in our all cases. It reflects that development of ADEM can’t be predicted by disease severity or any metabolic derangements.

We also found that patients test for blood group were Rh positive. This can point towards association of virus related immune mediated response with Rh factor but needs further clarification by large studies.

To our knowledge, it is the first case series regarding dengue related ADEM reported so far. We focused on pure cases of ADEM not encephalitis as the treatment of two is far different from one another. Dengue encephalitis usually takes a good course with supportive therapy while few cases of ADEM reported before also responded well to high dose steroids. Our case series described the exceptionally aggressive and rapidly progressive nature of ADEM in context of Dengue infection that is resistant to 1st and second line therapy. However, ADEM disease pathogenesis and management requires more elaboration by a larger studies. To conduct larger level studies is not less than a challenge because the incidence of disease is quite low. Moreover role of other immune modulator drugs or monoclonal antibodies should be explored in order to address the rising incidence of dengue related ADEM in future epidemics.12

Dengue related ADEM in our case series occurred in simple dengue fever after mean of 11 days. Fever wasn’t frequent sign. None had cytopenias or capillary leakage. All had extremely extensive and aggressive disease non responsive to steroids or plasma exchange. All died due to brain herniation.